Paperback: 250 pages
ISBN-10: 1645480550
ISBN-13: 978-1645480556
Publisher: Vesuvian Books (September 22, 2020)
Language: English
Praise for SISTERS OF THE MOON
“Alexandrea Weis does an outstanding job of painting succinct, hard-hitting scenes that carry Durra from a new role in a convent to a more active position confronting supernatural forces and long-hidden truths that could change not just her life, but the world. Sisters of the Moon represents a fine example of the use of the novella form at its best. It creates a superior blend of action, mystery, and evolving protagonist dilemmas and growth that will keep readers on their toes and involved up to the story’s epilogue of unexpected lessons in survival and achievement. Highly recommended for those who like their supernatural mystery stories to embrace a sense of character growth where the fine line between good and evil proves more mercurial than most.” —D. Donovan, Senior Reviewer, Midwest Book Review
“While a horror story on the surface, Sisters of the Moon is more than a simple tale of three young women sold to satisfy the debts of others who uncover a dark secret. It’s more than just a fresh take on the werewolf mythos or another banal story about the age-old battle between good and evil. Stunning in its imagery and richly detailed, Weis’s Sisters of the Moon blends history and religion into a tale of sisterhood and empowerment as delightfully slow-burning as it is sinister, smart, and not at all shy about probing the status quo of the treatment of women who challenge patriarchal systems–and who fight to defend what is right. Sisters of the Moon is the kind of supernatural gothic horror women readers in the genre have been waiting for.” —Seven Jane, The Nerd Daily

A monstrous fate will turn a girl into a legend.

On an island in Lake Obersee, where The Sisters of St. Gertrude abide, a destitute Moor named Durra arrives. Sold for taxes, she and her two companions tend to the nuns and their collection of cats. At night, she combs the library for details on the order, the remote island, and the beasts howling outside her window.

But when a prank reveals the sisters’ gruesome secret, Durra is forced to accept a new fate. Bestowed an unearthly power, she must choose between life as a nun or living among the monsters beyond the convent walls.

Her path is about to change the tide in the ultimate war. The war between good and evil.

I received a free copy for an honest review. What happens is my opinion and mine alone. There was no compensation for this review.

SISTERS OF THE MOON is a fantasy horror that weaves female empowerment and mystery. The imagery is dark and the characters are full of life. From the beginning, you are pulled into the situation Durra and the other girls are in.

Weis is clever in how she writes her characters. Each one has personality that doesn’t take away from the other. The darkness of the setting and story is equally as thrilling, leaving a well balanced narrative. Add in the length and you have a a single sitting adventure that leaves you wanting more. 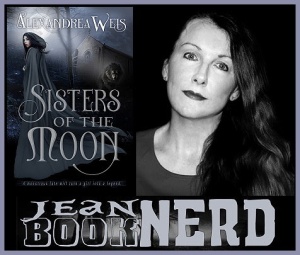 Alexandrea Weis, RN-CS, PhD, is a multi-award-winning author of over twenty-seven novels, a screenwriter, ICU Nurse, and historian who was born and raised in the French Quarter of New Orleans. Having grown up in the motion picture industry as the daughter of a director, she learned to tell stories from a different perspective and began writing at the age of eight. Infusing the rich tapestry of her hometown into her novels, she believes that creating vivid characters makes a story moving and memorable. A member of the Horror Writers Association and International Thriller Writers Association, Weis writes mystery, suspense, thrillers, horror, crime fiction, and romance. She lives with her husband and pets in New Orleans where she is a permitted/certified wildlife rehabber with the Louisiana Wildlife and Fisheries and rescues orphaned and injured animals.

The Carpenter's Box
The Booket Blog
The Cooking Bookworm's Corner